Keypad navigation
Lack of continuity between keypad and touch screen
Rubber boot on base of grip
Professional software costs extra
It has been well over 10 years since SATIR released the SATIR S160 thermal imager. This pistol style thermal imager made big waves at the time against rival FLIR, and was an instant hit with the new genre of pistol grip style thermal cameras. It provided a level of value and innovation that really connected with users. Year after year this model was re-invented with different names and specifications, each a refinement on the previous design. Fast forward 13 years and the HOTFIND S is the latest incarnation in this long line of industry proven thermal imagers.

Admittedly when I took the SATIR Hotfind S out the box I was a little disappointed to see essentially the same camera I have owned for the past 6 years; in the form of the Hotfind LR. It is the same orange colour, same body style, its buttons are identical and it has exactly the same rugged rubberisation. There’s plenty of clichés I can use to describe this camera, and the old adage of “if it aint broke don’t fix it” comes to mind. I’ve personally owned at least 5 or 6 of the various SATIR Hotfind variants, so I was really hoping for something that broke the mould.

In many ways I am glad they didn’t. While it’s not as exciting, you don’t get this level of refinement when you keep changing the design and releasing ground breaking models. The result is a truly reliable camera with solid functionality with a handful of subtle refinements that improve the user experience. If you are a Toyota buyer, this is the camera you would buy.

For those who are seeing the camera for the first time (and not comparing it to its predecessors), there’s a lot to like. The unit not only looks robust, it is genuinely solid and well built. In over 10 years in the field, I’ve seen these models take an absolute hiding and still keep on going. In the early days, the hinged screen was always a target of the competitor’s scorn, whom might I add, only offered fixed screen models. Now of course, after more than a decade of proven reliability those claims have long evaporated.

hotfind-s-back-227x300The tilt screen provides excellent ergonomics and allows the operator a much more comfortable viewing angle across a variety of situations. Closing the tilt screen places the unit into sleep mode to conserve power and also conveniently protects both screen and touchpad from injury during travel.

It is solidly hinged in a robust housing and requires no adjustment. In my experience the screen has always performed without incidence and provides valuable ergonomic advantages over fixed models. I wouldn’t be without it.

The HOTFIND Series has always been regarded as a solid all-rounder. The 384×288 detector resolution is quite high for this class of camera and the image quality is excellent. The pistol grip style has always been classed in the plant maintenance genre, however with this kind of mid-level resolution plenty of people are taking advantage of those extra pixels and using it at the professional entry level; particularly for electrical distribution inspections where it has the spatial resolution to handle small conductors and components. The standard 24° angle lens delivers 1.3 mrad geometric resolution (IFOV), which was once an industry standard for professional thermal imagers. In other words this is very respectable. The wide angle (48°) and telephoto (12°) lens options add to the incredible versatility of this model and it’s no wonder it’s finding a wider fan base.selection-of-hotfind-s-lenses-300×212

The HOTFIND thermal imagers have always boasted a large pixel count compared to their competitors which makes images look stunning, however this new model HOTFIND S has been given a boost to thermal sensitivity, down to 0.05°C, making it even better. This brings the unit in line with its top rivals and most professional models. The image uniformity is also noticeably improved compared with previous models that tended to drift at the periphery. This often made low temperature inspections impractical, such as building diagnostics, due to variations in uniformity across the thermal image. I am pleased to report that the HOTFIND S has good uniformity and a regular NUC (non-linear uniformity correction) interval that corrects any excursions. The “A” (adjust) button provides an instant correction on demand, which is my preferred option with any thermal imager; being able to actuate a NUC on demand. When placed into manual level and span mode, the “A” button also instantaneously auto adjusts the level and span to the scene. From an operators perspective, this is a fantastic way to control level and span without tedious adjustment. 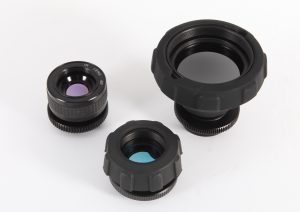 It works brilliantly for a variety of situations where you do not want the level and span to be continuously adjusting; like comparing bearings against one another, or electrical components.

The HOTFIND S does have an all-new user interface, which for a long time user like myself is not so much a learning curve, but an un-learning curve from the way I used to do things. I completely by accident discovered that it had a touch screen. It was one of those moment when I realised my age… a colleague of mine picked up the camera and started tapping at the screen. “what are you doing” I asked perplexed, he replied “looking through the menu”. “Oh”, was my dumbfounded response.

So, unlike previous models which were exclusively keypad driven, the SATIR HOTFIND S also has a 3.6” capacitive touch screen. This is a very nice addition as it bridges the gap between a sometime awkward and less than intuitive keypad interface. The onscreen menus and GUI is large and clearly labelled, and easy to operate even with my large fingers. The GUI is much more comprehensive than previous models in every regard. File management and image review has taken a major leap forward. The HOTFIND S now has the ability in an APP-like-way to navigate the SD card, organise images, copy, move, rename and edit files.

Given the new GUI, it’s probably time for a button re-think. The “C” button which was traditionally cancel or back button, now activates the main menu. Yes, it still acts as a cancel button and also brings up the menu on the home screen. The enter button, which was traditionally the menu button, now activates the spot analysis settings… and still performs as an enter button. Thankfully the S button is still the pause/save button. A single press with pause the frame, while holding for 2 seconds with save it. The trigger button on the front is still user defined and can be set for Laser, LED, Snapshot, Freeze or Shutter. The last 3 are mostly redundant as they are already achieved with the A & S buttons on the keypad, but I guess it’s handy if you have short thumbs!

The new integral battery with USB charging in my opinion is perfectly complimentary for this model and provides a level of convenience which will suit the intended end user. This is consistent with the market following which has widely adopted this principle for predictive maintenance cameras. With phone chargers practically everywhere in a work environment you never have to look far to find one. It really is very convenient. The 5 hours of run-time is quite extraordinary off one battery, however professional users may find it a bit more limiting and will struggle with a day-long inspection.

The rubber boot on the bottom of the unit which covers the video output port could also do with a rethink. This has been a feature since the very first model and is one of the first items to break off and leave the camera exposed to ingress. While I can see the rubber boot has undergone a re-design, and the base looks much thicker and has been given a “hinge point” in the rubber, only time will tell if this component fares better than previous versions.

As you can see from my list there is a lot to like about the Hotfind S. Refinement, rather than re-design has resulted in the fine tuning of many attributes that now work in a way we take for granted. In fact my “like” list could have gone on for much longer. The user interface is a major step forward for this series and with further refinement still will be a hard model to improve upon.